Those Flippin’ Pyramids of School Hierarchy

There is something about a two-week break from school that, once the initial refreshment has worked through the system (takes about 5 days), ideas and creativity flow like saturated aquifers (topical – we’ve had a ‘spring’ running through the village all week as the hills round here leak out their accumulated rain from England’s wettest year on record). I’ve read so many insightful, imaginative and deeply considered blogs over the past 10 days or so that I feel the need for a place to organise, classify and maintain them somewhere to return to on a regular basis. So this post is as much about me finding a library system as much as anything else.

The theme that many of them adhere to is found in the school structure model that is usually presented. That irregular pyramid of responsibility that emits alluring scents of differential salaries, timetables, status, responsibility, pressure and – accountability. It’s the pyramid that many of us intend to climb or rise up, a greasy-pole to be overcome or a promotion ladder to be stepped up. The language is all about ascent, getting to the top, being above where you were and defying gravity. It’s imagery that necessitates strength, robustness and a rising of the cans from the can’ts.

I’m always surprised that ‘Students’ don’t make an appearance in most structural hierarchies. At least this industrial pyramid acknowledges the end-recipient, though I don’t know if we’d use the same term in education. (pause….reflects). Not sure ‘all’ of us would use that term.

I suppose New Year and ‘considering change’ are synonymous. We often know what we want to achieve, but it’s finding an effective strategy through the process that often causes the intention to grind to a halt prematurely. Dylan Wiliam presented a template for effective school change in one of his addresses at SSAT a few weeks ago that Alex Quigley @HuntingEnglish expertly summarised in his post Making and Sustaining Habit Changes in Education http://huntingenglish.wordpress.com

Focusing on one element of organisational change in ‘Shaping the Path’ I reckon an attempt to ‘tweak the environment’ can give a considerable impact if we change our perception of school hierarchies by inverting the traditional pyramid of school structure. This is nothing original – there are plenty of inverted pyramid structures for the asking on Google images but we don’t always apply it to schools and – more importantly – we don’t always think through the implications for changing our perceptions and subsequent actions. For instance, this company prides itself on its inverted pyramid management structure: 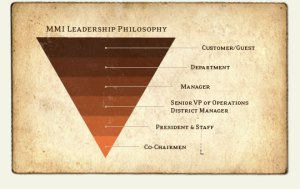 However, if you look at their website here the listing of the key personnel suggests they haven’t worked the significance of the inverted structure into their thinking to any great extent. It looks like a PR flip rather than flipping the thinking.

So what are the implications of an inverted pyramid school structure?

1. Ask the Deliverers what Back-stage Support they need from you to Deliver their Best
Teachers have the most regular proximity with students. Consult them about what they need to be able to do their job better. Fabulous analogy with teaching made by @mike_gunn about the Japanese method of worker-consultation to improve organisational performance: Bottom-Up Management: What The Hell Have Toyota Quality Circles Ever Done For Us? http://bit.ly/ZYFxOX

2. Deliberately Create the Environment for Delivery to be the Best
An inspired literary analogy from @Simon_Warburton shows how active, positive staff interactions is the only way SLT can generate influence and impact. SLTs prime responsibility is ‘support’ to those in the levels above – not ‘line-management’ : Challenges for senior leadership-the dangers of the GOTcha culture http://bit.ly/134L8SB

3. Be pro-active in looking after the people above you who Deliver
The further you ‘sink’ from the teaching face, the more you have to work through others to have an impact on students. In the traditional pyramid we think we can ‘cascade’ our advice, instructions and directives: gravity will sloosh them down. In the inverted pyramid you have to work harder to get your influence permeating upwards through the various levels. This detailed and intricately reasoned post from @kevbartle emphasises that you can only achieve by considerately working through other people : Doing Human Resources as a Member of SLT http://bit.ly/VrUr9M

4. Manage with discretion; advise by raising everyone’s horizon
A role within the pyramid is about helping other adults perform to their best. Sometimes hard conversations have to take place. That ‘accountability’ role is sometimes one which you need to impress on those further up the pyramid. But this can be done in a supportive and enhancing way. Be creative, endorse the positive and do it in a way which leaves all involved feeling empowered with a sense of what can be achieved rather than what was lacking, failing or not adequate: Onwards and Upwards rather than Grinding Down. Rachael Stevens @murphiegirl illustrates how learning walks can focus on the heart of what needs addressing – and/or praising: ‘Walk on Through’ http://bit.ly/TSsI5P

5. Be sure you want to sink down into a leadership role – you need to be prepared to carry a lot of weight
There have been a number of posts from people considering whether the leap to SLT is one they should attempt. For heaven’s sake, schools need the best SLT they can obtain. But the decision has to be for the right reasons. Instead of imagining ‘rising’ through the organisation, think – in the inverted pyramid – as sinking to deeper levels of responsibility and weightier challenges of ‘support’. The sage advice from ‘Chips of Brookfield’ cannot be bettered: Dear Senior Leaders http://bit.ly/Z8Xvs2

6. The rock on which the whole pyramid pivots
The ‘rock’ on which the whole inverted pyramid rests is the head. They need to be resolute, broad-shouldered and able to anchor the whole organisation in a bold vision, clearly communicated, which steadies the edifice above them and prevents it swaying to the vagaries of external pressures. Tom Sherrington aka @headguruteacher talks of building a force-field of confidence around the school. Its foundations are best laid from bottom-up through all the levels within a school: We’ve got the FEAR: Fantastic expectations; Amazing revelations http://bit.ly/UcG4VB

There will be others that I’ve missed – please consider sending me links to similar-type posts I can add to this ‘library’. But if the way we perceive an organisation influences how those within it go about its daily business, inverting school organisation models could be a ‘tweak to the environment’ that Shapes a new Path with minimum investment compared to possible benefits. Will current school leaders publish an inverted pyramid structure? Not sure. Will some of those not in headship roles – who may be there in the next few years choose to present their first school organisation structure as an inverted pyramid – and breathe life into its implications? Perhaps in doing so they would be making their core purpose stand on its head.